First launched in June 2015 with a three-day conference in Mumbai, Draft includes a range of engagements, including research and workshops, have been realised in each city. These convergences have set the pace for site-sensitive artworks that are currently taking shape.

During the Zurich Conference, all participants from the nine collaboratives will share their research:

Orchestrations, Connecting Spaces Hong Kong–Zurich, May 27–June 12, 2016
The exhibition looks at the modalities of “orchestra-making” in various communities across Hong Kong. Young’s film and artist publication seek to understand the function of historical archetypes of community orchestras and the politics of the contemporary music notation system as tools of our everyday negotiations with power structures. 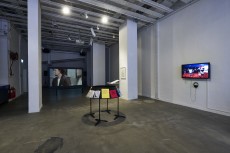 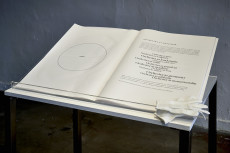 Drill Man, July 2016
The film tells the story of a man who carries a portable drill, clandestinely destroying the public spaces of the megalopolis he lives in. A snapshot of post-industrial China, it explores the uneasiness and inequalities caused by speedy urbanisation and technologisation.

On Trials, ongoing
In Egypt, especially post-2011, the surreality of the legal realm is an everyday presence that devastates people’s lives in both systematic and completely spontaneous ways. In this filmic work, Metwaly and Rizk delve into the construction of the country’s spectral legal reality.
Elsewhere–Struggles Across the Sea, Wekalet Behna, Alexandria, April 17–23, 2016
Mossallam explores 19th century Alexandria as a hub for peripheral imaginaries, a place where Italian anarchists, Syrian artists and Egyptian workers came together to articulate new world-views and organise against existing ones. She seeks to revive these critical stances by renegotiating and restaging the surviving cultural artefacts through a workshop, performances and other public interventions.

Any Given Sunday, April 27–July 5, 2016
A series of multidisciplinary happenings—including contemporary art, poetry and music—will question the notions and binaries of visibility and invisibility, of acceptance and rejection, in Cape Town’s highly contested urban and township space.

Vacation from Vacancy, May 5, 2016 (Prologue) and May 28, 2016 (Parade)
The project aims to understand the so-called refugee crisis as a crisis of urban living. To that end, a parade—in collaboration with different political and cultural auteurs—was organised in Hamburg in response to the ongoing discussions on abandoned properties and new housing blocks for refugees.

At Night, Lightning, television and online, June 2016
Teatro Ojo will intervene in a public television channel and online platforms such as YouTube, with montages of images that have been in circulation in Mexico. The project inquires: How can we make the image public without falling for its violence and sensationalism?

R and R, March 2016–ongoing
Located in a rebuilt shed in Lallubhai Compound, a slum “resettlement and rehabilitation” colony in Mumbai, R and R is, among other things, a productive space to explore the world, a wedge in the developmental discourses of lack and plight, and an articulation of incremental politics.

Swiss Psychotropic Gold: Rohstoffwechsel–Delinking Commodity Trading, July 2016
Switzerland’s commodity business is caught up in postcolonial and neoliberal trajectories that run through the cultural and moral economies. Yet, public debate on such involvement is absent. knowbotiq’s performative intervention seeks to reveal molecular, psychotropic and derivative materialities bound up with world gold trade and the refining of gold in Switzerland. The intervention fabulates on how postcolonial amnesia and global bravado are aesthetically and affectively condensed in the public myth of white Swiss innocence and righteousness.